Past Chapter Meetings and Events

On February 1, 2014, a beautiful celebration was held at the Colorado Springs Antlers Hotel to commemorate the chapter’s 100th year since it’s founding. The room was filled with Daughters from across the state and many distinguished guests. Many of the ladies wore period dresses which added beauty to the festivities. There was an afternoon of friends, fun and food, treasuring the memories of the past and building new memories for the future.

Kinnikinnik members placed American flags at the graves of veterans in a local cemetery the weekend before Memorial Day, 2017. Our Kinnikinnik Chapter NSDAR understands the sacrifices made by members of the military, as well as their families. As the saying goes, “Home of the Free, Because of the Brave.”

Each year, this event is hosted by Kinnikinnik Chapter NSDAR officers, at a member’s home. It is a fun, relaxed day of visiting with many guests, good friends, and hopefully — new members! It’s always enjoyable to catch up with friends after a summer break, often meet our state leaders, and hear from guest speakers. Also, a party is not a party without games which officers are happy to provide including one with questions of “How much do you know about DAR?” – it is always so much fun.

Kinnikinnik members support Veterans! A check was sent to Honor Flight, an organization that flies World War II Veterans and Veterans of the Korean War (Conflict) to Washington, D.C. to see the memorials dedicated to them.

The school house, built in 1922 and placed on the DAR National Register of Historic Places in 1993, served as our meeting venue. Our guest speaker was Carrie Robertson who spoke about the preservation of the school and community center, both of which survived the Black Forest Fire of 2013.

We celebrated Patriot’s Day (9/11) by delivering cookies and treats to all police and fire stations in El Paso County by chapter members. Several members have been impacted by the devastation of fires in the past few years so we continue to show our appreciation to the fire crews.

The Transitional Housing Initiative kicked off October 17th. This program is designed to take eight Homeless Veteran Families off the street, remove barriers such as transportation and job search support. It also includes three meals a day (two at the Clarion and one at Marian House,) and spending 30 days in the Clarion Hotel. During this time, homeless veterans seek employment and save their wages so that after the 30 day time period, they are able to move to housing they can afford through the jobs they’ve taken. Kinnikinnik members generously donated money for a meal for the homeless veterans.

Kinnikinnik Daughters continued their proud tradition of walking in the annual Veterans Day Parade in downtown Colorado Springs. Chapter ladies, some in period costumes, marched in the parade in honor of all veterans.

We love to dress up! And, you guessed it – red, white, and blue are our favorite colors! It is such an honor to be able to march in the annual Veterans Day Parade in downtown Colorado Springs. The streets are lined with people all cheering for our veterans. Kinnikinnik Chapter NSDAR has been proudly honoring our active service men and women and all our veterans as far back as any of us can remember. We enjoy marching each year with our other Colorado Springs chapters: Zebulon Pike and Cheyenne Mountain. The Veterans Day Parade is fun for the whole family. We hope to see all of you there next year!! 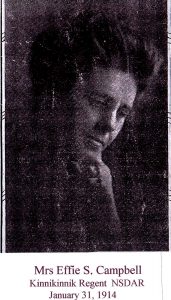 Miss Effie Shelton was born June 9, 1871, in Windsor, Missouri, daughter of Mr. and Mrs. George James Shelton. Miss Shelton was married to Captain William H. Simpson, a traffic manager of the Western Union Telegraph Company in Denver, Colorado. Mr. Shelton died at the age of 33 in 1904.

Mrs. Effie S. Campbell died at the age of ninety on January 24, 1962 and is buried next to her husband in the Everyreen Cemetery in Colorado Springs. 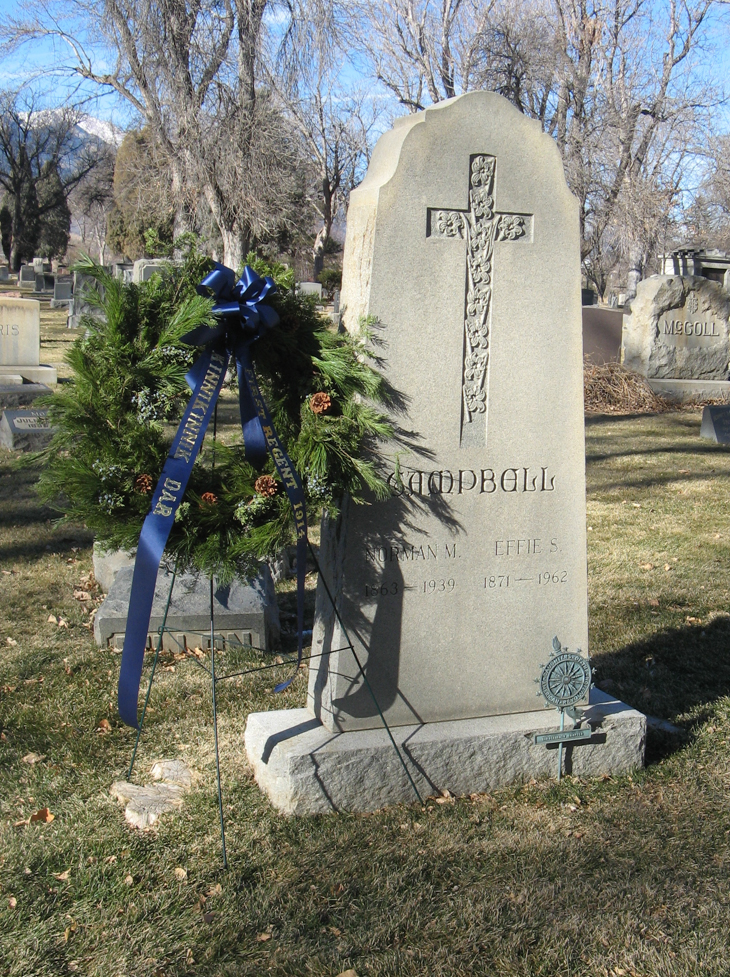 Members are involved in community service to discover the rewards of volunteerism, demonstrate the positive volunteer opportunities associated with our mission, and to help make our local communities a better, more friendly place. We give back to our communities in appreciation for the nation we love! Through Service to America, we hope to demonstrate the DAR’s widespread significant impact in our communities.