The Blue Star Memorial Program is a project of the National Garden Clubs, Inc. (NGC) with Colorado’s first maker placed and dedicated in 1947. The monument is a tribute to all armed forces that have defended the United States of America. At the marker dedication, Kinnikinnik Chapter NSDAR was honored to be joined with members from the Pikes Peak Chapter, Sons of the American Revolution, and representatives from several military organizations in or near Colorado Springs. It was a day to recognize our military, patriotism, and preservation. Also at the dedication, guests were joined by General William Palmer (portrayed by Bob Stovall) and Queen Palmer (portrayed by Dianne Hartshorn). To close the events, taps was played by Chaplain Paul Darrow from the 4061 VFW. 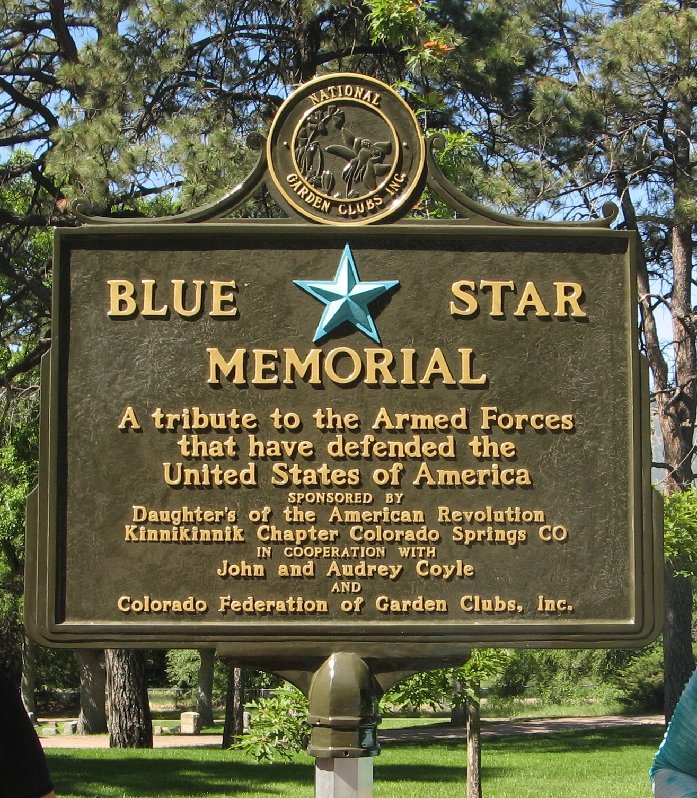 Kinnikinnik Daughters and guests were also given a little history of the cemetery and the little chapel where our monument was placed. There are many historical stories to be told about the people that are in residence in the cemetery. As explained by Evergreen Cemetery Director, Will DeBoer, the cemetery is also for the living. 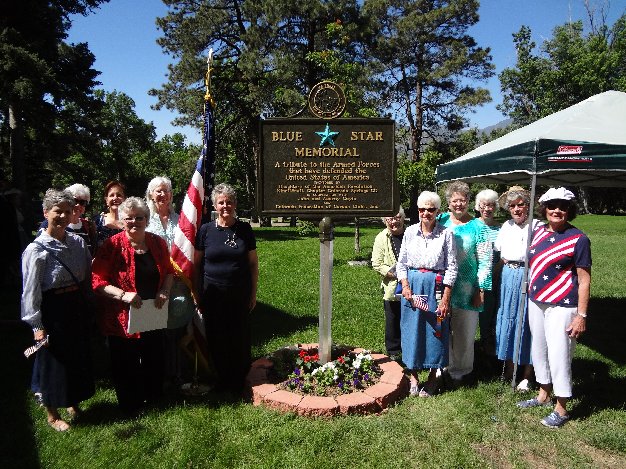 The original schoolhouse was built in 1922 to serve the needs of students living in the heavily treed area known as Black Forest, in northern El Paso County, Colorado.

“I remember we used to reach up to put our mittens on the fence that was over our heads and surrounded the stove.”1

Over the years, the school was claimed by adjoining school districts from time to time, but it was primarily supervised by the El Paso County Superintendent. The school operated until 1945 when it was closed, and students were sent to other districts. The building was sold at auction and purchased by Mrs. Burgess. Following her death, El Paso County purchased the property and turned it into a home for the county road maintenance man and his family until the 1980s when the county abandoned the property.

“We all knew each other. It was a real warm, nice feeling.”2

A small group of local historians organized and decided to see if the old school could be saved. The property received National Historic Designation on November 3, 1992. The group applied for, and received, two grants through the Colorado History Foundation; one in 1996 for repairs to the roof and another in 1997 for repairs to the foundation. Many hours of hard work and searches for authentic furnishings went into the project. Everything was donated by those interested in preserving the school. In addition to the National Register of Historic Places, the building is also one of the schools listed in “Rural School Buildings in Colorado” for the Colorado State Register of Historic Properties. 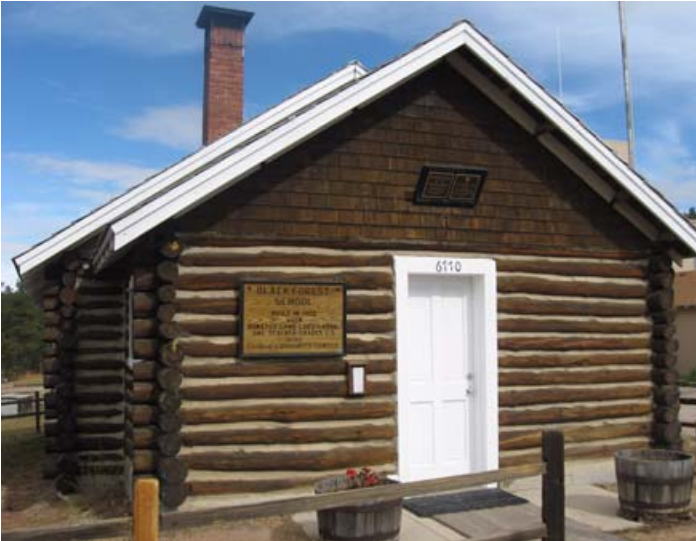 At the dedication in 1996, El Paso County officially gave the property to the Black Forest Fire Department to oversee the project since their fire station was located next door. The first station has since moved to a larger site and the school house property is currently in the process of being given to the restoration committee which is known as Friends of the Black Forest Log School. Their mission is to preserve and maintain the building and use it for educational purposes by promoting local history and early day education. 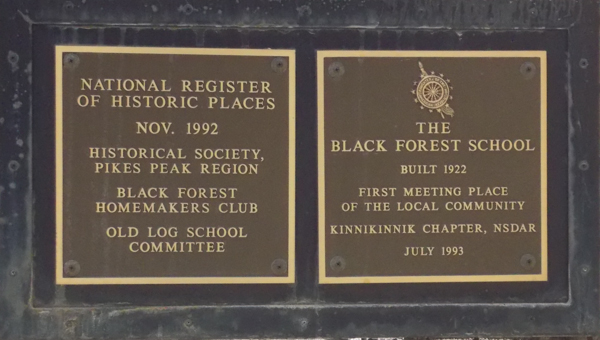 In the fall of 2013, Kinnikinnik held one of our monthly meetings at The Black Forest School. This was even more special as this honored building was spared in the 2013 summer fires.

Colorado Springs was organized as the “Fountain Colony” of Colorado. The first stake in the town site was driven July 31, 1871, at the southeast corner of Pikes Peak and Cascade avenues. General William J. Palmer, then managing director and superintendent of the Kansas Pacific Railroad, first saw the area in 1869, and reported “…it should be made the most attractive place for homes in the West—a place for schools, colleges, literature, science, first-class newspapers, and everything that the above implies…” (1955 Colorado Springs Free Press, Le Roy Ellinwood)

In March of 1870, General Palmer organized the Denver and Rio Grande Company to build a railroad from Denver south to Mexico. In the fall of that year, the railroad purchased 9,312.27 acres of land at the site for about $10,000. The Fountain Colony was organized with General Robert A. Cameron as vice president, superintendent and general manager; W.E. Pabor as secretary; E.S. Nettleton as chief engineer. All three had come from Union Colony (Greeley) where they had become disenchanted with the imperious and puritanical ways of Nathan Meeker.

“As soon as General Palmer was assured that the Denver and Rio Grande was going to be built to Colorado City [now western Colorado Springs], he began planning the City…”3

During its first years, Colorado Springs was known as Fountain Colony for its position on Fountain Creek; later it was renamed Colorado Springs for the mineral springs at Manitou. This marker was re-dedicated with both the Zebulon Pike and Kinnikinnik Chapters on August 1, 1983.

Early settlers selected the upper Monument Valley because they found good soil, excellent grass, and abundant water. The families listed on the marker worked together to build this Indian fort on the McShane ranch, and used it as a defense against Indian raiders from 1865 to 1868.

The Ute Trail extended from the plains of Colorado to Utah, its eastern reach being the forerunner of US-24 west from Colorado Springs. Before the time of the white man, it had been used for many years by some bands of the Ute Indians in their annual trip from their homelands in central and western Colorado to the springs at Manitou, and in their forays into plains country to fight with their enemies or to hunt. 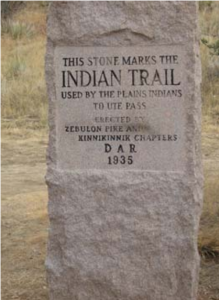 As the white man began moving westward in the 19th century, explorers, trappers, prospectors, and cowboys began using the trail. Major Stephen Harriman Long’s expedition of 1820 made note of it. Kit Carson traveled it to trap beaver in South Park. The journals of John Charles Fremont speak of it. The 1859 gold rush saw the beginning of extensive use of the trail for freighting supplies to the gold fields and bringing out gold ore. Its use dwindled after 1872 when a new wagon road was built following Fountain Creek (Fontaine qui Bouille). The Colorado Midland Railroad in the 1870’s built its line upward and westward following closely the wagon road, not only serving the gold fields, but enabling the development of a great recreation area.

Members are involved in community service to discover the rewards of volunteerism, demonstrate the positive volunteer opportunities associated with our mission, and to help make our local communities a better, more friendly place. We give back to our communities in appreciation for the nation we love! Through Service to America, we hope to demonstrate the DAR’s widespread significant impact in our communities.